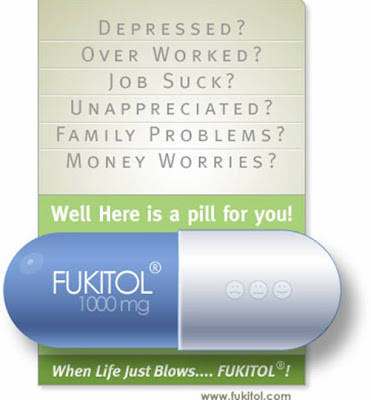 DAMNITOL
Take 2 and the rest of the world can go to hell for up to 8 full hours.

EMPTYNESTROGEN
Suppository that eliminates melancholy and loneliness by reminding you of how awful they were as teenagers and how you couldn't wait till they moved out!

DUMBEROL
When taken with Peptobimbo, can cause dangerously low IQ, resulting in enjoyment of country music and pickup trucks.

FLIPITOR
Increases life expectancy of commuters by controlling road rage and the urge to flip off other drivers.

MENICILLIN
Potent anti-boy-otic for older women. Increases resistance to such lethal lines as, 'You make me want to be a better person. '

JACKASSPIRIN
Relieves headache caused by a man who can't remember your birthday, anniversary, phone number, or to lift the toilet seat

ANTI-TALKSIDENT
A spray carried in a purse or wallet to be used on anyone too eager to share their life stories with total strangers in elevators.

NAGAMENT
When administered to a boyfriend or husband, provides the same irritation level as nagging him, without opening your mouth .
at 4:17 pm 2 comments:

Email ThisBlogThis!Share to TwitterShare to FacebookShare to Pinterest
Labels: Battle of the Sexes, Women on top

Announcing the new, the beloved, the 2007 DARWIN AWARD WINNERS!

"Named in honor of Charles Darwin, the father of evolution,
the Darwin Awards commemorate those who improve our gene pool
by accidentally removing themselves from it."

This was the year of the Squashed Darwin Award Winner. THREE
independent groups of people attempted to remove the supports
from beneath a barn, a water tower, and a heavy factory roof.
In all cases, the structures collapsed without their aptly-named
supports. Duh! This year brought us 16 jaw-droppping nominees,
not counting new nominees for previous years and Near Misses
(AKA Honorable Mentions) which I will cover in the next ish.

Enjoy the stories of the winners... and be glad you're not one!

"Driving is not a time to be practicing your multitasking skills,"
remarked CHP spokesman Tom Marshall, commenting on a 29-year-old
computer tutor's decision to drive along Highway 99 in California
while working on his laptop. He drifted over the center line, and
was killed by oncoming traffic. CHP officers found Oscar's computer
still running, plugged into the Honda Accord's cigarette lighter.

June 2007, Illinois | Two Valparaiso men tested their reflexes by
playing "chicken" with a train. Which man could stay on the rail
the longest in the path of an oncoming train? At the stroke of
midnight, the contest was decided. The winner, aptly named
Patrick Stiff, lost his life. The train continued on,
as the conductor was unaware that it had hit anyone.

January 2007, West Virginia) Three friends set out to dismantle
a dilapidated barn one bracing winter afternoon. Speaking of
bracing... One industrious man fired up his chainsaw and ripped
through a crucial support post. Carrying the weight of a full
barn roof, those wooden support beams were all that stood between
the demolition worker and structural collapse. It was all fun
and games until the roof, sans support, succumbed to the pull
of gravity and flattened the man with the chainsaw. As a
consolation prize, the deceased was indeed successful at
demolishing the barn.

(Darwin notes, this story is unconfirmed, but no disputes have
come to my attention, as usually happens with bogus stories.)

Addendum: This was the year of the Squashed Darwin Award Winner.
Two other groups of people attempted to remove the supports from
beneath a water tower, and a heavy factory roof. In both cases,
the structure collapsed without their aptly-named supports. Duh!

January 2007, East Germany | One man's extraordinary effort to
eradicate a mole from his property resulted in a victory for the
mole. The metal rods he pounded into the ground and connected to
a high-voltage power line, electrified the very ground the man
stood upon. He was found dead at his holiday property on the
Baltic Sea. Police had to trip the main circuit breaker before
venturing onto the property.

June 2007, South Carolina | A passing cabbie found a 21 year-old
deceased couple laying naked in the road an hour before sunrise.
Authorities were baffled. There were no witnesses, no trace of
clothing, and no wrecked vehicles present. But investigators
eventually found a clue high on the roof of a nearby building:
two sets of neatly folded clothes. Safe sex takes on a whole new
meaning when you are perched on the edge of a pyramid-shaped
metal roof. "It appears as if [they] accidentally fell off the
roof," Sgt. McCants said.

THE ENEMA WITHIN (Confirmed True by Darwin)

May 2004, Texas | Michael was an alcoholic. And not an ordinary
alcoholic, but an alcoholic who liked to take his liquor... well,
rectally. His wife said he was "addicted to enemas" and often
used alcohol in this manner. The result was the same: inebriation.
And tonight, Michael was in for one hell of a party.

When the rest of us have had enough, we either stop drinking or
pass out. When Michael had had enough (and subsequently passed
out) the alcohol remaining in his rectal cavity continued to be
absorbed. The next morning, Michael was dead.

The 58-year-old did a pretty good job of embalming himself.
Toxicology reports measured his blood alcohol level as 0.47%.

In order to qualify for a Darwin Award, a person must remove
himself from the gene pool via an "astounding misapplication
of judgment." Three litres of sherry up the butt can only be
described as astounding. Unsurprisingly, his neighbors said
they were surprised to learn of the incident.

A man was riding in the back of his limousine when he saw a man eating grass by the roadside. He ordered his driver to stop and he got out to investigate. "Why are you eating grass?" he asked the man.

"I don't have any money for food," the poor man replied.

"Oh, please come to my house!"

"Bring them along!" the rich man said.

They all climbed into the limo. Once underway, the poor fellow said, "Sir, you are too kind. Thank you for taking all of us in."

The rich man replied, "No, you don't understand. The grass at my house is over three feet tall!"
at 12:08 pm No comments:

When Mozart passed away, he was buried in a churchyard. A couple days later, the town drunk was walking through the cemetery and heard some strange noise coming from the area where Mozart was buried.
Terrified, the drunk ran and got the priest to come and listen to it. The priest bent close to the grave and heard some faint, unrecognizable music coming from the grave. Frightened, the priest ran and got the town magistrate.

When the magistrate arrived, he bent his ear to the grave, listened for a moment, and said, "Ah, yes, that's Mozart's Ninth Symphony, being played backwards."

He listened a while longer, and said, "There's the Eighth Symphony, and it's backwards, too. Most puzzling."

So the magistrate kept listening; "There's the Seventh... the Sixth... the Fifth..."

Suddenly the realization of what was happening dawned on the magistrate; he stood up and announced to the crowd that had gathered in the cemetery, "My fellow citizens, there's nothing to worry about. It's just Mozart decomposing."
at 1:46 pm 2 comments:

A man asked his wife, "What would you most like for your birthday?"

On the morning of her birthday, he got her up bright and early and they went to a theme park. He put her on every ride in the park - the Death Slide, The Screaming Loop, the Wall of Fear. She had a go on every ride there was.

She staggered out of the theme park five hours later, her head reeling and her stomach turning.

Then off to a movie theater, popcorn, cola and sweets.

At last she staggered home with her husband and collapsed into bed.

Her husband leaned over and asked, "Well, dear, what was it like being ten again?"

A policeman interrogates three blondes who are training to become detectives. To test their skills in recognizing a suspect, he shows the first blonde a picture for five seconds and then hides it. "This is your suspect, how would you recognize him?"

The first blonde answers, "That's easy, we'll catch him fast because he only has one eye!"

The policeman says, "Well, uh, thats because the picture shows his profile."

Slightly flustered by this ridiculous response, he flashes the picture for five seconds at the second blonde and asks her, "This is your suspect, how would you recognize him?"

The second blonde giggles, flips her hair and says, "Ha! He'd be too easy to catch because he only has one ear!"

The policeman angrily responds, "What's the matter with you two?! Of course only one eye and one ear are showing because it's a picture of his profile! Is that the best answer you can come up with?"

Extremely frustrated at this point, he shows the picture to the third blonde and in a very testy voice asks, "This is your suspect, how would you recognize him?" He quickly adds, "Think hard before giving me a stupid answer."

The blonde looks at the picture intently for a moment and says, "Hmm - the suspect wears contact lenses."

The policeman is surprised and speechless because he really doesn't know if the suspect wears contacts or not. "Well, that's an interesting answer. Wait here for a few minutes while I check his file."

He leaves the room and goes to his office, checks the suspects file in his computer, and comes back with a beaming smile on his face. "Wow! I cant believe it. It's true! The suspect does in fact wear contact lenses. Good work! How were you able to make such an astute observation?"

"That's easy," the blonde replied. "He can't wear regular glasses because he only has one eye and one ear."
at 2:10 pm No comments: