The Darwin Awards honours those who improve the human genome by removing themselves from it.

Here are a couple of excellent examples:

Two men, 17 and 21, who imitated Darth Vader, and made light sabres from fluorescent light tubes. That's right, they opened them up, poured gasoline inside, and lit them. As one can imagine, a Star Wars sized explosion was not far behind. Darth Vader died, while his opponent survived to 'fess up to their creative, but stupid, reenactment.

Strength and endurance are two of the most important characteristics that can be passed on to improve the species, so physical challenges between males are frequent. In this case, two drinking buddies found themselves on an overpass 40 feet above a busy freeway in downtown Seattle at 2:45 a.m. It turned out to be the perfect place to determine who had more strength and endurance. Whoever could dangle from the overpass the longest would win!

Unfortunately, the winner was too tired from his victory to climb back up, despite help from his friend. The unidentified champion fell smack into traffic below.
at 8:32 am 3 comments: Links to this post

A man and a woman, who have never met before, but are both married to other people, found themselves assigned to the same sleeping room on a Transcontinental train. Though initially embarrassed and uneasy over sharing a room, They were both very tired and fell asleep quickly - he in the upper bunk and she in the lower.

At 1:00 AM, the man leaned over and gently woke the woman saying, "Ma'am, I'm sorry to bother you, but would you be willing to reach into the closet to get me a second blanket? I'm awfully cold."

"I have a better idea," she replied. "Just for tonight, let's pretend that we're married."

"Good," she replied. "Get your own blanket!"

After a moment of silence, he farted.
at 7:54 am 3 comments: Links to this post

To My Dear Friend the Dog

NOTE: I'm looking for a good joke to post for Halloween. If you have a favourite, please post it on the submissions page.

To My Dear Friend the Dog:

I'm so sorry about you being sent to the dog pound for the broken lamp which you did not break, the fish you did not eat, or the carpet that you did not wet.

Things here at the house are calmer now, and just to show you that I have no hard feelings, I'm sending you a picture, so you'll always remember me. 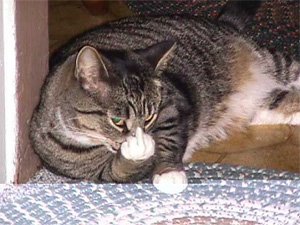 Two blondes walk into a building..........
You'd think at least one of them would have seen it.

A guy walks into the psychiatrist wearing only Clingfilm for shorts. The shrink says, "Well, I can clearly see you're nuts."

I went to buy some camouflage trousers the other day but I couldn't find any.

I went to the butchers the other day and I bet him 50 quid that he couldn't reach the meat off the top shelf.
He said, "No, the steaks are too high."

My friend drowned in a bowl of muesli.
A strong currant pulled him in.

A man came round in hospital after a serious accident. He shouted," Doctor, doctor, I can't feel my legs!"
The doctor replied, "I know you can't, I've cut your arms off".

I went to a seafood disco last week...
And pulled a muscle.

Two Eskimos sitting in a kayak were chilly. They lit a fire in the craft, it sank,
proving once and for all that you can't have your kayak and heat it.

Our ice cream man was found lying on the floor of his van covered with hundreds and thousands.
Police say that he topped himself.

Man goes to the doctor, with a strawberry growing out of his head. Doc says "I'll give you some cream to put on it."

'Doc I can't stop singing The Green, Green Grass of Home'
"That sounds like Tom Jones syndrome.
'Is it common? '
"It's not unusual."

A man takes his Rotteweiller to the vet. "My dog is cross-eyed, is there anything you can do for him?"
"Well," said the vet, "let's have a look at him"
So he picks the dog up and examines his eyes, then he checks his teeth. Finally, he says, "I'm going to have to put him down."
"What? Because he's cross-eyed? "
"No, because he's really heavy"

What do you call a fish with no eyes?
A fsh.

So I was getting into my car, and this bloke says to me "Can you give me a lift?"
I said "Sure, you look great, the world's your oyster, go for it.'

Apparently, 1 in 5 people in the world are Chinese. There are 5 people in my family, so it must be one of them. It's either my mum or my Dad, or my older Brother Colin, or my younger Brother Ho-Cha-Chu? But I think its Colin.

Two fat blokes in a pub, one says to the other "Your round."
The other one says "So are you, you fat bast**d!"

"You know, somebody actually complimented me on my driving today. They left a little note on the windscreen. It said,
'Parking Fine.' So that was nice."

A man walked into the doctors, he said, "I've hurt my arm in Several places"
The doctor said, "Well don't go there anymore"

Ireland's worst air disaster occurred early this morning when a small
two-seater Cessna plane crashed into a cemetery. Irish search and rescue workers have recovered 1826 bodies so far and expect that number to climb as digging continues into the night
at 7:51 am 9 comments: Links to this post

It was many years ago since the embarrassing day when a young woman, with a baby in her arms, entered his butcher shop and confronted him with the news that the baby was his and asked what was he going to do about it?

Finally he offered to provide her with free meat until the boy was 16. She agreed.

He had been counting the years off on his calendar, and one day the teenager who had been collecting the meat each week, came into the shop and said, "I'll be 16 tomorrow."

"I know," said the butcher with a smile, "I've been counting too, tell your mother, when you take this parcel of meat home, that it is the last free meat she'll get, and watch the expression on her face."

When the boy arrived home he told his mother.

The woman nodded and said, "Son, go back to the butcher and tell him I have also had free bread, free milk, and free groceries for the last 16 years and watch the expression on HIS face!"
at 8:43 am 5 comments: Links to this post

Email ThisBlogThis!Share to TwitterShare to FacebookShare to Pinterest
Labels: Women on top

After a hardy rainstorm filled all the potholes in the streets and alleys, a young mother watched her two little boys playing in the puddle through her kitchen window. The older of the two, a five year old lad, grabbed his sibling by the back of his head and shoved his face into the water hole.

As the boy recovered and stood laughing and dripping, the mother runs to the yard in a panic. "Why on earth did you do that to your little brother?" she says.

Below are four (4) questions and a bonus question. You have to answer them instantly. You can't take your time, answer all of them immediately.

Let's find out just how clever you really are.

You are participating in a race. You overtake the second person.

What position are you in?


Answer: If you answered that you are first, then you are absolutely wrong!
If you overtake the second person and you take his place, you are second!

Try not to screw up in the next question.

To answer the second question, don't take as much time as you took for the first question.

If you overtake the last person, then you are...?


Answer: If you answered that you are second to last, then you are wrong again. Tell me, how can you overtake the LAST Person?
You're not very good at this! Are you?

Very tricky math! Note: This must be done in your head only.

Do NOT use paper and pencil or a calculator. Try it.

Scroll down for answer.

Don't believe it? Check with your calculator!

Today is definitely not your day. Maybe you will get the last question right?

What is the name of the fifth daughter?


NO! Of course not. Her name is Mary. Read the question again.

Okay, now the bonus round.

There is a mute person who wants to buy a toothbrush. By imitating the action of brushing one's teeth he successfully expresses himself to the shopkeeper and the purchase is done.

Now if there is a blind man who wishes to buy a pair of
sunglasses, how should he express himself?

He just has to open his mouth and ask, so simple.
at 9:32 am 9 comments: Links to this post