We went to breakfast at a restaurant where the "seniors' special" was two eggs, bacon, hash browns and toast for $1.99.

"Then I'll have to charge you two dollars and forty-nine cents because you're ordering a la carte," the waitress warned her.

You mean I'd have to pay for not taking the eggs?" My wife asked incredulously.

"How do you want your eggs?"

A blonde finds herself in serious trouble. Her business has gone bust and she's in dire financial straits. She's so desperate that she decides to ask God for help. She begins to pray..."God, please help me. I've lost my business and if I don't get some money, I'm going to lose my house as well. Please let me win the Lotto."

Lotto night comes, and somebody else wins it. She again prays... "God, please let me win the Lotto! I've lost my business, my house and I'm going to lose my car as well."

Lotto night comes and she still has no luck. Once again, she prays... "My God, why have You forsaken me? I've lost my business, my house, and my car. My children are starving. I don't often ask You for help, and I have always been a good servant to You. PLEASE let me win the Lotto just this one time so I can get my life back in order."

Suddenly there is a blinding flash of light as the heavens open. The blonde is overwhelmed by the Voice of God Himself... "Sweetheart, work with Me on this... Buy a ticket"
at 9:14 am 4 comments:

A Blonde Game Of Intelligence

The lawyer first asked, "What is the distance between the Earth and the nearest star?"

Without saying a word the blonde handed him $5. Then the blonde asked, "What goes up a hill with 3 legs and comes back down the hill with 4 legs?"

Well, the lawyer looked puzzled. He took several hours, looking up everything he could on his laptop and even placing numerous air-to-ground phone calls trying to find the answer. Finally, angry and frustrated, he gave up and paid the blonde $50.00

The blonde put the $50 into her purse without comment, but the lawyer insisted, "What is the answer to your question?"

How many Christians does it take to change a light bulb?

Charismatic: Only 1
Hands are already in the air.

Pentecostal: 10
One to change the bulb, and nine to pray against the spirit of darkness.

Presbyterians: None
Lights will go on and off at predestined times.

Roman Catholic: None
Candles only.

Baptists: At least 15.
One to change the light bulb, and three committees to approve the change and decide who brings the potato salad and fried chicken .

Episcopalians: 3
One to call the electrician, one to mix the drinks and one to talk about how much better the old one was.

Mormons: 5
One man to change the bulb, and four wives to tell him how to do it.

Unitarians:
We choose not to make a statement either in favor of or against the need for a light bulb. However, if in your own journey you have found that light bulbs work for you, you are invited to write a poem or compose a modern dance about your light bulb for the next Sunday service, in which we will explore a number of light bulb traditions, including incandescent, fluorescent, 3-way, long-life and tinted, all of which are equally valid paths to luminescence

Methodists: Undetermined
Whether your light is bright, dull, or completely out, you are loved. You can be a light bulb, turnip bulb, or tulip bulb. Bring a bulb of your choice to the Sunday lighting service and a covered dish to pass.


With thanks to Jupiter's Girl for this one
at 10:07 am No comments:

I'm taking a couple of days off over this stuff-your-face-until-you're-sick season, so I've posted a few day's worth of jokes together.

You can tune in each day and scroll down to the appropriate one, just like opening your advent calendar, or you can gorge yourself on them all in one go, just like you always wanted to do with the chocolate advent calendar.

Merry Christmas, or whatever you like to celebrate at this time of year!

Email ThisBlogThis!Share to TwitterShare to FacebookShare to Pinterest
Labels: Xmas

Some of Santa's reply letters

Dear Billy,
Nice spelling. You're on your way to a career in lawn care. I've left you a book so you can learn to read and spell
I'm gave your older brother the space ranger. At least HE can spell.
Santa

Dear Santa,
I've been a good girl all year & the only thing I ask for is peace and joy in the world for everybody!
Love, Sarah

Dear Sarah,
Your parents smoked pot when they had you, didn't they?
Santa

Dear Santa,
I don't know if you can do this, but for Christmas I'd like for my mommy & daddy to get back together. Please see what you can do.
Love, Teddy

Dear Teddy,
Your dad's banging the babysitter like a screen door in a hurricane. Do you think he's gonna give that up to come back to your frigid mom who rides his ass constantly? It's time to give up that dream. I've left you some Lego instead.
Santa

Dear Francis,
Who names their kid "Francis"? I bet you're gay. I'veleft you a Barbie.
Santa

Dear Santa,
I left milk & cookies for you under the tree & carrots for your reindeer outside the back door.
Love, Susan

Dear Susan,
Milk gives me the dhiarrea, carrots make the deer fart in my face. You want to do me a favor? Next year leave a bottle of Scotch.
Santa

Dear Santa,
What do you do the other 364 days of the year? Are you busy making toys?
Your friend, Thomas

Dear Santa,
Do you see us when we're sleeping, do you really know when we're awake, like in the song?
Love, Jessica

Dear Jessica,
Are you really that gullible? I skipped your house.
Santa

****
Dear Santa,
I really want a puppy this year. Please, please, please,PLEASE, PLEASE could I have one?
Love, Timmy

Dear Timmy,
That whiny begging crap may work with your folks, but not with me.
I've left you a sweater, again.
Santa

Dearest Santa,
We don't have a chimney in our house. How do you get into our home?
Love, Marky

Dear Mark,
1st stop calling yourself "Marky", that's why you're getting your ass whipped at school. 2nd, you don't live in a house, you live in a low rent apt. 3rd, I got in your pad like the boogieman... through your bedroom window.
Sweet dreams, Santa
at 8:00 am No comments:

Email ThisBlogThis!Share to TwitterShare to FacebookShare to Pinterest
Labels: Xmas 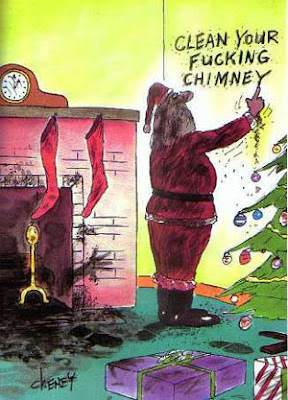 The Science of Santa

Of course all of this came as a shock to me, on account of me believing in Santa. Guess I'm not getting any presents now ...


There are approximately two billion children (persons under 18) in the world.

However, since Santa does not visit children of Muslim, Hindu, Jewish or Buddhist (except maybe in Japan) religions, this reduces the workload for Christmas night to 15% of the total, or 378 million according to the population reference bureau). At
an average (census) rate of 3.5 children per household, that comes to 108 million homes, presuming there is at least one good child in each.

Santa has about 31 hours of Christmas to work with, thanks to the different time zones and the rotation of the earth, assuming east to west which seems logical. This works out to 967.7 visits per second.

This is to say that for each Christian household with a good child, Santa has around 1/1000 Th. of a second to park the sleigh, hop out, jump down the chimney, fill the
stocking, distribute the remaining presents under the tree, eat whatever snacks have
been left for him, get back up the chimney, jump into the sleigh and get onto the next house.

Assuming that each of these 108 million stops is evenly distributed around the earth (which, of course, we know to be false, but will accept for the purposes of our calculations), we are now talking about 0.78 miles per household; a total trip of 75.5 million miles, not counting bathroom stops or breaks.

This means Santa's sleigh is moving at 650 miles per second--3,000 times the speed of sound. For purposes of comparison, the fastest man made vehicle, the Ulysses space probe, moves at a poky 27.4 miles per second, and a conventional reindeer can run (at best) 15 miles per hour.

The payload of the sleigh adds another interesting element. Assuming that each child gets nothing more than a medium sized LEGO set (two pounds), the sleigh is carrying over 500 thousand tons, not counting Santa himself. On land, a conventional reindeer can pull no more than 300 pounds. Even granting that the "flying" reindeer can pull
10 times the normal amount, the job can't be done with eight or even nine of them - Santa would need 360,000 of them.

This increases the payload, not counting the weight of the sleigh, another 54,000 tons, or roughly seven times the weight of the Queen Elizabeth (the ship, not the monarch). 600,000 tons travelling at 650 miles per second creates enormous air resistance - this would heat up the reindeer in the same fashion as a spacecraft
re-entering the earth's atmosphere.

The lead pair of reindeer would adsorb 14.3 quintillion joules of energy per second each. In short, they would burst into flames almost instantaneously, exposing the
reindeer behind them and creating deafening sonic booms in their wake. The entire reindeer team would be vaporised within 4.26 thousandths of a second, or right about the time Santa reached the fifth house on his trip.

Not that it matters, however, since Santa, as a result of accelerating from a dead stop to 650 m.s-1. in .001 seconds, would be subjected to acceleration forces of 17,000 G's. A 250 pound Santa (which seems ludicrously slim) would be pinned to the back of the sleigh by 4,315,015 pounds of force, instantly crushing his bones and organs and reducing him to a quivering blob of pink goo.

Therefore if Santa Claus ever did exist, he's dead now.