Pope on a Rope

The Pope was having a shower. Although he is very strict about the celibacy rules, he occasionally felt the need to exercise the right wrist, his was one of these occasions.

Just as he reached the Papal climax he saw a photographer taking a picture of the holy seed flying through the air.

"Hold on a minute" said the Pope. "You can't do that. You'll destroy the reputation of the Catholic Church."

"This picture is my lottery win" said the photographer. "I'll be financially secure for life."

So, the Pope offered to buy the camera off the photographer, and after lots of negotiation, they eventually arrived at a figure of two million quid.

The Pope then dried himself off, and headed off with his new camera. He met his housekeeper, who spotted the camera.

"That looks like a really good camera," she said, "how much did it cost you?"

"TWO MILLION QUID!" said the housekeeper, "They must have seen you coming!"
at 7:11 pm 5 comments: 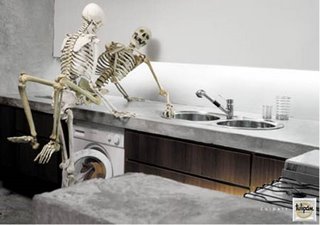 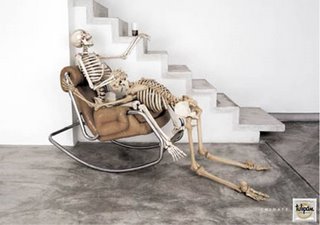 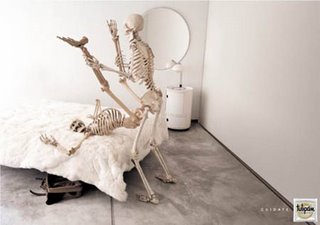 Little Nancy was in the garden filling in a hole when her neighbor Tom peered over the fence. Interested in what the youngster was up to, he asked in his friendliest way, "What are you up to, Nancy?"

"My goldfish died," replied Nancy tearfully, without looking up, "and I've just buried him."

The neighbor commented, "That's an awfully big hole for a goldfish, isn't it?"

Nancy patted down the last heap of earth and then replied, "That's because he's inside your f*cking cat."
at 2:11 pm No comments:

There is a company in Sweden called locum, which operates medical wards.They decided to place an ad to celebrate Christmas and the new year.

The copywriter at the ad agency said "Why not replace the 'o' in locum with a heart?". You know, cuddly and all.

The coolest thing was the comment from locum's boss when the papersinterviewed him about the mistake. "Ah, well. These things happen. And if it helps to fill our maternity wards we don't mind." 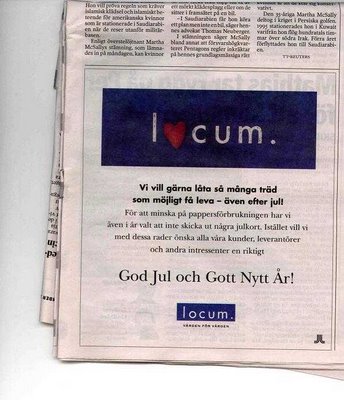 A little boy about 12 years old walked down the street dragging a flattened frog on a string behind him. He came up to the doorstep of a House of ill repute and knocked on the door.

When the Madam answered it, she saw the little boy and asked what he wanted He said, "I want to have sex with one of the women inside. I have the money to buy it, and I'm not leaving until I get it."

Of course the Madam said no.

He said, "I heard all the men talking about having to get shots after making love with Amber. THAT'S the girl I want."

Since the little boy was so adamant and had the money to pay for it, the cynical Madam told him to go to the first room on the right. He headed down the hall dragging the squashed amphibian behind him.

Ten minutes later he came back, still dragging the frog, paid the Madam, and headed out the door. The Madam stopped him and asked, "Why did you pick the only girl in
the place with a disease, instead of one of the others?"

He said, "Well, if you must know, tonight when I get home, my parents are going out to a restaurant to eat, leaving me at home with a baby-sitter. After they leave, my baby-sitter will have sex with me because she just happens to be very fond of cute little boys. She willthen get the Dose that I just caught".

"In the morning when Dad goes to work, the Milkman will deliver the milk, have a quickie with Mum and catch the clap, and HE'S THE BASTARD WHO RAN OVER MY FROG!"
at 5:05 pm 3 comments:

A 7 year old and a 4 year old are upstairs in their bedroom. "You know what?", says the 7 year old, "I think it's about time we started swearing."

The 4 year old nods his head in approval.

"When we go downstairs for breakfast, I'll swear first, then you swear after me, ok?" The 4 year old agrees with enthusiasm.

The mother walks into the kitchen and asks the 7 year old what he wants for breakfast. "Oh, sh*t mum, I guess I'll have some Coco Pops".

WHACK!! He flies out of his chair, tumbles across the kitchen floor, gets up, and runs upstairs crying his eyes out.

She looks at the 4 year old and asks with a stern voice, "And what do you want for breakfast, young man?!"

A blonde pushes her FIAT Punto into a petrol station. She tells the mechanic, "It died."

After he works on it for a few minutes, it's idling smoothly.

He replies, "Oh, just crap in the carburettor."