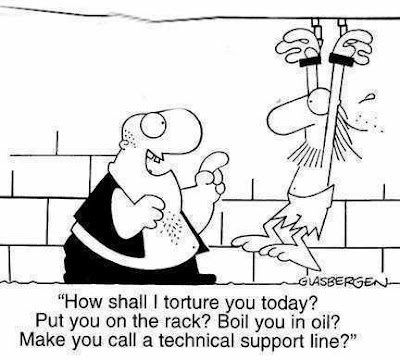 If you would like to see your favourite joke here at Joke Mail, please place it in the Submissions Page
at 8:55 am 2 comments:

Email ThisBlogThis!Share to TwitterShare to FacebookShare to Pinterest
Labels: Images

What do you know?

A man met a beautiful lady and he decided he wanted to marry her right away.

She protested, "But we don't know anything about each other."

He replied, "That's all right; we'll learn about each other as we go along."

So she consented, and they were married, and went on a honeymoon to averynice resort.

One morning, they were lying by the pool when he got up off his towel, climbed up to the 10 meter board and did a two and a half tuck gainer, entering the water perfectly, almost without a ripple. This was followed by a three rotations in jack-knife position before he again straightened out and cut thewater like a knife. After a few more demonstrations, he came back and lay down on his towel.

She said, 'That was incredible!"

He said, "I used to be an Olympic diving champion. You see, I told you we'd learn more about ourselves as we went along."

So she got up, jumped in the pool and started doing laps. She was moving so fast that the froth from her pushing off at one end of the pool would hardly be gone before she was already touching the other end of the pool. She did laps in freestyle, breast stroke, even butterfly! After about thirty laps, completed in mere minutes, she climbed back out and lay down on her towel, barely breathing hard.

He said, "That was incredible! Were you an Olympic endurance swimmer?"

"No," she said, "I was a hooker in Venice and I worked both sides of the canal."


If you would like to see your favourite joke here at Joke Mail, please place it in the Submissions Page
at 10:03 am 3 comments:

Email ThisBlogThis!Share to TwitterShare to FacebookShare to Pinterest
Labels: Battle of the Sexes, Sport

It was the stir of the town when an 80-year-old man married a 20-year-old girl. After a year of marriage she went into hospital to give birth.

The nurse came out to congratulate the fellow saying, "This is amazing. How do you do it at your age?"

He answered, "You've got to keep that old motor running."

The same nurse said, "You really are amazing. How do you do it?"

He again said, "You've got to keep the old motor running."

The same thing happened the next year.

The nurse said, "Well, well, well! You certainly are quite a man!"

He responded, "You've got to keep that old motor running."

The nurse then said, "Well, you better change the oil. This one's black!"


If you would like to see your favourite joke here at Joke Mail, please place it in the Submissions Page
at 8:08 am 6 comments:

Email ThisBlogThis!Share to TwitterShare to FacebookShare to Pinterest
Labels: Battle of the Sexes, Senior Citizens

We've all had trouble with our animals, but I don't think anyone can top this one:

Calling in sick to work makes me uncomfortable. No matter how legitimate my excuse, I always get the feeling that my boss thinks I'm lying.

On one recent occasion, I had a valid reason but lied anyway, because the truth was just too darned humiliating. I simply mentioned that I had sustained a head injury, and I hoped I would feel up to coming in the next day. By then, I reasoned, I could think up a doozy to explain the bandage on the top of my head. The accident occurred mainly because I had given in to my wife's wishes to adopt a cute little kitty.

Initially, the new acquisition was no problem

Then one morning, I was taking my shower after breakfast when I heard my wife, Deb, call out to me from the kitchen. "Honey! The garbage disposal is dead again. Please come reset it."

"You know where the button is," I protested through the shower pitter-patter and steam. "Reset it yourself!"

"But I'm scared!" she persisted. "What if it starts going and sucks me in?" There was a meaningful pause and then, "C'mon, it'll only take you a second."

So out I came, dripping wet and butt naked, hoping that my silent outraged nudity would make a statement about how I perceived her behaviour as extremely cowardly. Sighing loudly, I squatted down and stuck my head under the sink to find the button. It is the last action I remember performing.

It struck without warning, and without any respect to my circumstances. No, it wasn't the hexed disposal, drawing me into its gnashing metal teeth. It was our new kitty, who discovered the fascinating dangling objects she spied hanging between my legs.

She had been poised around the corner and stalked me as I reached under the sink. And, at the precise moment when I was most vulnerable, she leapt at the toys I unwittingly offered and snagged them with her needle-like claws. I lost all rational thought to control orderly bodily movements, blindly rising at a violent rate of speed, with the full weight of a kitten hanging from my masculine region.

Wild animals are sometimes faced with a "fight or flight" syndrome. Men, in this predicament, choose only the "flight" option. I know this from experience. I was fleeing straight up into the air when the sink and cabinet bluntly and forcefully impeded my ascent. The impact knocked me out cold.

When I awoke, my wife and the paramedics stood over me. Now there are not many things in this life worse than finding oneself lying on the kitchen floor butt naked in front of a group of "been-there, done-that" paramedics.

Even worse, having been fully briefed by my wife, the paramedics were all snorting loudly as they tried to conduct their work, all the while trying to suppress their hysterical laughter... and not succeeding.

Somehow I lived through it all. A few days later I finally made it back in to the office, where colleagues tried to coax an explanation out of me about my head injury. I kept silent, claiming it was too painful to talk about, which it was. "What's the matter?" They all asked, "Cat got your tongue?"

If they only knew!

Why is it that only women laugh at this?


If you would like to see your favourite joke here at Joke Mail, please place it in the Submissions Page
at 8:10 am No comments:

Email ThisBlogThis!Share to TwitterShare to FacebookShare to Pinterest
Labels: Animals, Stupidity and Insults

I got the March Darwin Awards Newsletter this morning, so thought I'd share the highlights with you:


Mole Hunt
January 2007, Germany A 63-year-old man's extraordinary effort to eradicate a mole from his property resulted in a probable victory for the mole. The man had pounded several metal rods into the ground and connected them to a high-voltage power line, with the intent of rendering the subterranean realm uninhabitable.

Incidentally, the maneuver electrified the very ground he stood upon. He was found dead at his holiday property on the Baltic Sea. Police had to trip the main circuit breaker before venturing onto the property.

The precise date of the sexagenarian's demise could not be ascertained, but the electricity bill may provide a clue.

November 2006, Singapore Picture a college dorm room. Textbooks, dirty laundry, sexy posters, food wrappers, and in the middle of it all, a 16-year-old male rocking out to loud music. A typical student, a typical day.

But this particular student, bouncing on his bed as he rocked out on his air guitar, was about to "take things too far," according to the coroner's report. Li Xiao Meng, a student at Singapore's Hua Business School, bounced up and down on his bed with such enthusiasm that he rocked himself right out of the third-floor window.

Normally the windows are locked, but students reportedly force the locks so they can sneak a cigarette. Perhaps alluding to Ted Nugent's rock song, the court ruled it a case of "Death By Misadventure."

January 2007, Georgia Raising a new barn is an endeavor that brings a community together in a working celebration. Demolishing a barn, on the other hand, is a more solitary pursuit. A trio of friends set out to dismantle a dilapidated structure one bracing winter afternoon. Speaking of bracing...

There was wood to be cut, so it seemed sensible for one industrious friend to fire up his chainsaw. It was less sensible for him to set about severing crucial support posts. Carrying the weight of a full barn roof, those wooden beams were all that stood between the workers and structural collapse.

With minimal forethought, this ill-fated lumberjack could have anticipated his soon-to-be deadly problem. It was all fun and games until the roof succumbed to the pull of gravity. As a consolation prize, the deceased was indeed successful at demolishing the barn.

(March 2000) The Grand Canyon in Arizona is cordoned off by a fence around the more treacherous overlooks, to prevent unsteady sightseers from tottering into the depths. Some of these overlooks have small towering plateaus a short distance from the fence. Tourists toss coins onto the plateaus, like dry wishing wells. Quite a few coins pile up on the surfaces, while others fall to the valley floor far below.

One entrepreneur climbed over the fence with a bag, and leapt to one of the precarious, coin-covered perches. He filled his bag with booty, then tried to leap back to the fence with the coins.
But the heavy bag arrested his jump, and several tourist were treated to a view of his plunge to the bottom of the Grand Canyon.

He did not survive to harvest the piles of coins that had suffered his same fate.

If you would like to see your favourite joke here at Joke Mail, please place it in the Submissions Page
at 9:06 am 3 comments:

Blonde guy gets home early from work and hears strange noises coming from the bedroom.

He rushes upstairs to find his wife naked on the bed, sweating and panting. "What's up?" he says.

"I'm having a heart attack,"cries the woman.

He rushes downstairs to grab the phone, but just as he's dialing, his 4-year-old son comes up and says: "Daddy! Daddy! Uncle Ted's hiding in your closet and he's got no clothes on!"

The guy slams the phone down and storms upstairs into the bedroom, past his screaming wife, and rips open the wardrobe door. Sure enough, there is his brother, totally naked, cowering on the closet floor.

"You rotten bastard," says the husband, "my wife's having a heart attack and you're running around naked scaring the kids!"


If you would like to see your favourite joke here at Joke Mail, please place it in the Submissions Page
at 8:07 am No comments: 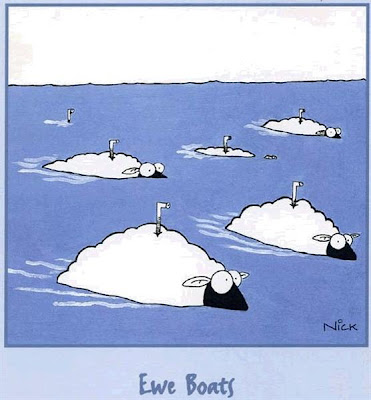 If you would like to see your favourite joke here at Joke Mail, please place it in the Submissions Page
at 9:04 am No comments: