Next time you think your hotel bill is too high you might want to
consider this...

A husband and wife are traveling by car from Key West to Boston.

After almost twenty-four hours on the road, they're too tired to
continue, and they decide to stop for a rest.

They stop at a nice hotel and take a room, but they only plan to sleep
for four hours and then get back on the road. When they check out four
hours later, the desk clerk hands them a bill for $350.

The man explodes and demands to know why the charge is so high. He tells
the clerk although it's a nice hotel, the rooms certainly a ren't worth
$350.

When the clerk tells him $350 is the standard rate, the man insists on
speaking to the Manager.

The Manager appears, listens to the man, and then explains that the
hotel has an Olympic-sized pool and a huge conference center that were
available for the husband and wife to use.

"But we didn't use them," the man complains.

"Well, they are here, and you could have," explains the Manager. He goes
on to explain they could have taken in one of the shows for which the
hotel is famous. "The best entertainers from New York, Hollywood and Las
Vegas perform here," the Manager says.

"But we didn't go to any of those shows," complains the man again.

"Well, we have them, and you could have," the Manager replies.

No matter what facility the Manager mentions, the man replies, "But we
didn't use it!"

The Manager is unmoved, and eventually the man gives up and agrees to
pay. He writes a check and gives it to the Manager.

The Manager is surprised when he looks at the check. "But sir," he says, "this check is only made out for $50."

"But I didn't!" exclaims the Manager.

Email ThisBlogThis!Share to TwitterShare to FacebookShare to Pinterest
Labels: Travel

The Final Word On Nutrition

After an exhaustive review of the research literature, here's the final
word on nutrition and health:

2. Mexicans eat a lot of fat and suffer fewer heart attacks than us.

5. Germans drink beer and eat lots of sausages and fats and suffer fewer
heart attacks than us.

Eat and drink what you like. Speaking English is apparently what kills
you.
at 1:25 pm No comments:

A Buddhist on his journey came across a hot dog vendor. The sign said "hot dogs $1, or 1.25 with everything.”

The Buddhist said, “make me one with everything.”

He received the hot dog gave the vendor a 20 dollar bill and started to munch.

He waited for the vendor to give him his change. Finally, he said, “where is the change?”

A man goes to Spain and attends a bullfight. Afterwards he goes to a nearby restaurant and orders the specialty of the day. The waiter brings him two very big balls on a huge plate, which the tourist eats with relish.

The next day he goes to the same restaurant again, once again orders the specialty of the day, and he is brought two very big balls on a huge plate. It tastes even more scrumptious.

The third day he does the same and the fourth, but on the fifth day he goes to the restaurant and orders the specialty of the day, and they bring him two very small balls on a big plate. The man asks, "What gives?" 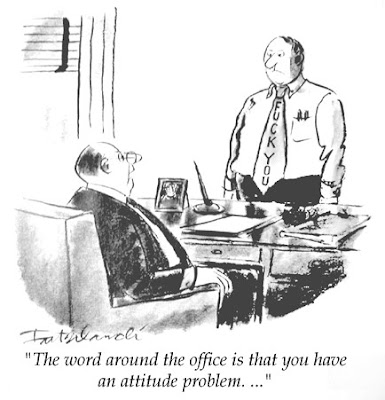 Email ThisBlogThis!Share to TwitterShare to FacebookShare to Pinterest
Labels: Workplace

How to Prepare Chicken

A waiter asks a man, “May I take your order, sir?”

“Yes,” the man replies. “I’m just wondering, exactly how do you prepare your chickens?”

“Nothing special, sir. We just tell them straight out that they’re going to die.”
at 1:01 pm No comments:

Why did the referees stop the leper hockey game?