A blonde went to an appliance store sale and found a bargain. "I would like to buy this TV," she told the salesman.

She hurried home and dyed her hair, then came back and again told the salesman, "I would like to buy this TV."

"Darn, he recognized me," she thought.

She went for a complete disguise this time: a brown curly wig, big baggy clothes, and big sunglasses. Then she waited a few days before she approached the salesman again and said, "I would like to buy this TV."

Frustrated, she exclaimed, "How do you know I'm a blonde?" 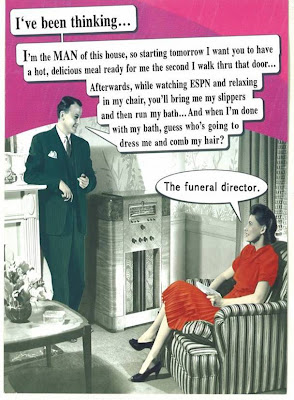 Email ThisBlogThis!Share to TwitterShare to FacebookShare to Pinterest
Labels: Women on top 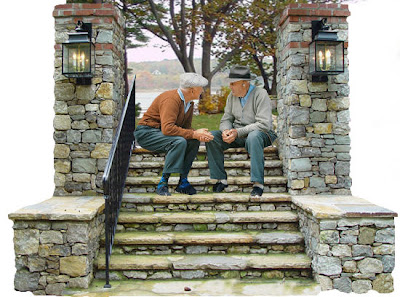 Bill and Sam, two elderly friends, met in the park every day to
feed the pigeons, watch the squirrels and discuss world p roblems.

One day Bill didn't show up. Sam wasn't concerned; he thought Bill might have a cold or some urgent appointment. But after Bill hadn't shown up for a week or so, Sam really got worried. However, since Sam didn't know where Bill lived (the only time they ever got together was at the park) he was unable to find out what had happened to him.

After a month had passed, Sam figured he had seen the last of Bill. On his next visit to the park, however, Bill was sitting on their usual bench waiting for him.

Amazed and delighted, Sam exclaimed,"For crying out loud Bill, what in the world happened to you?:"

Bill replied, "I've been in jail."

"Well," Bill said, "you know Sue, that cute little blonde
waitress at the coffee shop where I sometimes go?"

"Well, one day she filed rape charges against me. At age 89,
I was so proud that when I got into court, I pleaded guilty."

"Children Are Forbidden From Saying Anything Darndest"

"Wheel of Fortune and Terror"

"The Price is Right If Saddam Says It's Right"

"Everybody Loves Saddam Or He'll Have Them Shot"

A farm boy accidentally overturned his wagonload of corn. The farmer who lived nearby heard the noise and yelled over to the boy, "Hey Willis, forget your troubles. Come in and visit with us. I'll help you get the wagon up later."

"That's mighty nice of you," Willis answered, "but I don't think Pa would like me to."

"Well okay," the boy finally agreed, and added, "but Pa won't like it."

After a hearty dinner, Willis thanked his host. "I feel a lot better now, but I know Pa is going to be real upset."

"Don't be foolish!" the neighbor said with a smile. "By the way, where is he?"