A bald man with a peg leg gets invited to a costume party. Being shy and self-conscious about his appearance, he goes to the best costume shop in town. When he gets there, he tells the shop owner his situation and that he would rather cover his head and leg with a costume instead instead of exploiting his apparent problems.

So, the shop owner comes back with a lifeguard costume. The man says, "No, no. That will show off my peg leg. I can't hide it with that. Try again."

So the shop owner leaves and comes back with a monk costume And again the man says, "No, no. I can't wear that. It will make people notice my head."

Obviously pissed off, the shop owner leaves and comes back with a five-pound bag of caramels, gives it to the man and says, "Here. Just take this."

Confused, the man says, "What am I suposed to do with a bag of caramels?"

Smiling, the shop owner says, "Take home this bag of caramels, melt them, pour it all over your body, stick that peg leg up your ass and tell everyone you're a caramel apple."
at 3:10 pm No comments:

There was this guy that went to the doctor to get is sperm counted. The lady behind the desk handed him a jar and said, "Bring it back tomorrow, full."

He says, "Okay, I'll be back tomorrow then."

Well he goes home and comes back the next day, and he hands the woman the jar.

And the woman behind the counter looked stunned and asked, "You asked your neighbor over to help you!?"

A big shot businessman had to spend a couple of days in the hospital. He was a royal pain to the nurses because he bossed them around just like he did his employees.

None of the hospital staff wanted to have anything to do with him. The head nurse was the only one who could stand up to him. She came into his room and announced, "I have to take your temperature."

After complaining for several minutes, he finally settled down, crossed his arms and opened his mouth.

"No, I'm sorry, the nurse stated, "but for this reading, I cannot use an oral thermometer." This started another round of complaining, but eventually he rolled over and bared his rear end.

After the nurse inserted the thermometer, she announced, "I have to get something. Now you stay JUST LIKE THAT until I get back!"

She leaves the door to his room open on her way out. He curses under his breath as he hears people walking past his door laughing. After almost an hour, the man's doctor comes into the room. "What's going on here?" asked the doctor.

Angrily, the man answers, "What's the matter, Doc? Haven't you ever seen someone having their temperature taken?"

After a pause, the doctor confesses, "Well, no. I guess I haven't. Not with a carnation anyway."
at 3:41 pm No comments:

An Asian man walked into the currency exchange in New York with 2000 Japanese yen and walked out with $72.

The following week, he walked in with 2000 yen, and was handed $66. He asked the teller why he got less money than the previous week.

The Asian man stormed out, and just before slamming the door, turned around and shouted, "FLUC YOU AMELICANS, TOO!"
at 3:02 pm 2 comments:

Order for me, please 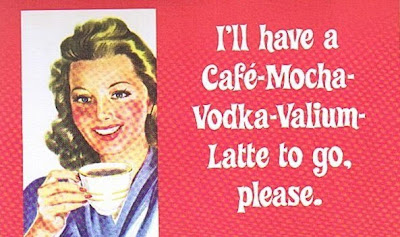 Then, the chief surgeon walked in and asked what was wrong. The head nurse replied, "We don't know what to do with this baby."

So the chief surgeon took one look and said, "You should put him into a mental institution."

Another week later, the man offered the Pope 20 million dollars and finally the Pope accepted.

The following day, the Pope said to all his officials, "I have some good news and some bad news. 'The good news is, that we have just received a check for 20 million dollars. The bad news is, we lost the Wonder Bread account!"
at 4:44 pm 2 comments: