A woman visited her plastic surgeon who told her about a new procedure called 'The Knob,' where a small knob is placed at the top of the woman's head and could be turned to tighten up her skin and produce the effect of a brand new face-lift. Of course, the woman wanted 'The Knob.'

Over the course of the years, the woman tightened the knob, and the effects were wonderful, the woman remained young looking and vibrant.

After fifteen years, the woman returned to the surgeon with two problems. "All these years, everything has been working just fine. I've had to turn the knob many times and I've always loved the results. But now I've developed two annoying problems: First, I have these terrible bags under my eyes and the knob isn't getting rid of them."

The doctor looked at her closely and said, "Those aren't bags, those are your breasts."

She said, "Well, I guess there's no point in asking about the goatee, is there?"
at 2:10 pm No comments:

Be Careful Out There:

IDIOT SIGHTING:
We had to have the garage door repaired. The Sears repairman told us that one of our problems was that we did not have a 'large' enough motor on the opener. I thought for a minute, and said that we had the largest one Sears made at that time, a 1/2 horsepower. He shook his head and said, "Lady, you need a 1/4 horsepower." I responded that 1/2 was larger than 1/4. He said, "NO, it's not. Four is larger than two.."

My daughter and I went through the McDonald's take-out window and I gave the clerk a $5 bill. Our total was $4.25, so I also handed her a quarter. She said, "you gave me too much money."

I said, "Yes I know, but this way you can just give me a dollar bill back."

She sighed and went to get the manager who asked me to repeat my request. I did so, and he handed me back the quarter, and said "We're sorry, but they could not do that kind of thing." The clerk then proceeded to give me back $1 and 75 cents in change.

Do not confuse the clerks at McD's.

IDIOT SIGHTING :
I live in a semi rural area. We recently had a new neighbor call the local township administrative office to request the removal of the DEER CROSSING sign on our road. The reason: "Too many deer are being hit by cars out here! I don't think this is a good place for them to be crossing anymore."

IDIOT SIGHTING IN FOOD SERVICE:
My daughter went to a local Taco Bell and ordered a taco. She asked the person behind the counter for "minimal lettuce." He said he was sorry, but they only had iceberg lettuce.

IDIOT SIGHTING :
I was at the airport, checking in at the gate when an airport employee asked, "Has anyone put anything in your baggage without your knowledge?"

To which I replied, "If it was without my knowledge, how would I know?"

He smiled knowingly and nodded, "That's why we ask."

Happened in Birmingham, Ala.

IDIOT SIGHTING :
The stoplight on the corner buzzes when it's safe to cross the street. I was crossing with an intellectually challenged coworker of mine. She asked if I knew what the buzzer was for. I explained that it signals blind people when the light is red. Appalled, she responded, "What on earth are blind people doing driving?!"

She was a probation officer in Wichita , KS

IDIOT SIGHTING:
At a good-bye luncheon for an old and dear coworker. She was leaving the company due to 'downsizing.' Our manager commented cheerfully, "This is fun. We should do this more often." Not another word was spoken. We all just looked at each other with that deer-in-the-headlights stare.

This was a lunch at Texas Instruments.

IDIOT SIGHTING:
I work with an individual who plugged her power strip back into itself and for the sake of her life, couldn't understand why her system would not turn on.

A deputy with the Dallas County Sheriffs office, no less.

IDIOT SIGHTING:
When my husband and I arrived at an automobile dealership to pick up our car, we were told the keys had been locked in it. We went to the service department and found a mechanic working feverishly to unlock the driver's side door. As I watched from the passenger side, I instinctively tried the door handle and discovered that it was unlocked. "Hey," I announced to the technician, "its open!"

His reply, "I know. I already got that side."

This was at the Ford dealership in Canton , Mississippi

STAY ALERT!
They walk among us... and the scary part is that they VOTE and they REPRODUCE !
at 1:09 pm No comments:

Number Nine:
Dragging out boxes that haven't been used since last season.

Number Six:
Family coming to stay with you.

Number Five:
Family and friends from out of state calling you.

Number Three:
Days off from work.

And the Number One reason Hurricane Season is like Christmas:
At some point you're probably going to have a tree in your house!
at 2:57 pm No comments:

Children write about the sea:

1) This is a picture of an octopus.. It has eight testicles. (Kelly age 6)

3) If you are surrounded by sea you are an island. If you don't have sea all round you, you are incontinent.. ( Wayne age 7)

4) Sharks are ugly and mean, and have big teeth, just like Emily Richardson she's not my friend no more. (Kylie age 6)

5) A dolphin breaths through an ass hole on the top of its head. (Billy age 8)

6) My uncle goes out in his boat with pots, and comes back with crabs. (Millie age 6)

7) When ships had sails, they used to use the trade winds to cross the ocean. Sometimes, when the wind didn't blow, the sailors would whistle to make the wind come. My brother said they would have been better off eating beans. (William age 7)

9) I'm not going to write about the sea. My baby brother is always screaming and being sick, my Dad keeps shouting at my Mom, and my big sister has just got pregnant, so I can't think what to write. (Amy age 6)

10) Some fish are dangerous. Jellyfish can sting. Electric eels can give you a shock. They have to live in caves under the sea where I think they have to plug themselves into chargers. (Christopher age 7)

12) Divers have to be safe when they go under the water. Two divers can't go down alone, so they have to go down on each other. (Becky age 8)

13) On holidays my Mom went water skiing. She fell off when she was going very fast. She says she won't do it again because water fired right up her fat ass. (Jules age 7)
at 1:36 pm No comments: 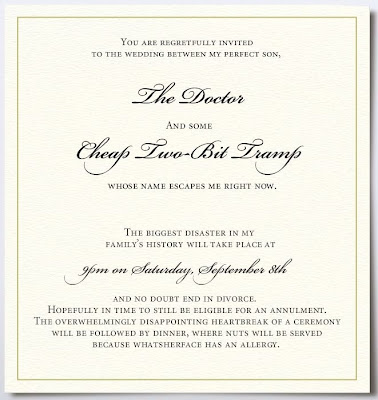 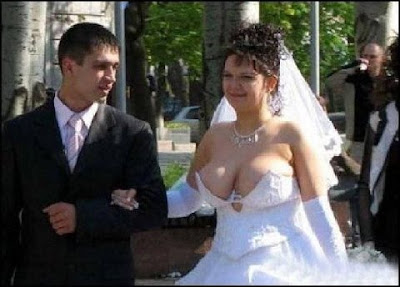 What the hell was the attraction?
at 12:48 pm No comments:

A rather confident young man walks into a bar and takes a seat next to a very attractive young woman. He gives her a quick glance, then casually looks at his watch for a moment. The woman notices this and asks, "Is your date running late?"

"No," he replies, "I just bought this state-of-the-art watch and I was testing it."

Intrigued, the woman says, "A state-of-the-art watch? What's so special about it?"

"It uses alpha waves to telepathically talk to me," he explains.

"What's it telling you now?"

"Well, it says that you're not wearing any panties..."

The woman giggles & replies, "Well it must be broken then, because I am wearing panties!"

Email ThisBlogThis!Share to TwitterShare to FacebookShare to Pinterest
Labels: Bars

1) If you and I were squirrels, I could bust a nut in your hole.

2) How do you like your eggs: fried, scrambled or fertilized?

3) My love for you is like diarrhea; I just can't hold it in.

4) If your right leg was Thanksgiving, and your left leg was Christmas, then could I meet you between the holidays?

5) How about we play lion and lion tamer? You hold your mouth open, and I'll give you the meat.
at 4:19 pm No comments: