WOMEN WINNING DARWIN AWARDS?!
Crazy! We haven't seen this many since never. Four below, and just coming across my desk is this report: Angela's mother admits her daughter was "always in a party mode." The 20-year-old woman was playing Nintendo in the passenger seat of a pickup when she threw her head out the open window; she was killed when her head struck several mailboxes. Authorities said the woman was "just hanging out the truck window having fun." Her mother found the story 'credible.'

May 2009, Louisiana | Back seat drivers beware! Annoyed at how slowly her boyfriend was driving, Tamera B, 22, encouraged him to pick up the pace so she could get to work on time. Joking that it would be faster to walk to work, she opened the door of the pickup and stuck her foot out before falling to her death. Deputies of the jurisdictional Sheriff's Office stated that the truck was traveling at highway speed on I-12 at the timeof the incident. Her death was ruled accidental.

AUGUST 2009 | NEWS: Wendy Darwin Northcutt, writer of humorous obituaries and author of five Darwin Awards books, nearly made her own dark list when she broke her leg devising a clever way to cool the house during a California heat wave. She opened up a grate in the hallway intending to install a fan to force basement air up. The phone rang and, forgetting about the hole in the floor, three hours passed before she wandered back down the hall and fell into it. Crunch!

A broken leg was the price she paid for the lesson:
Never walk away from a hole in the floor.

June 2009, North Carolina | Greensboro was innundated with four inches of pouring rain in two hours leading to standing water, and stranding cars on several roads. Rosanne Tippett, 50, was not deterred. She hopped on her moped and drove to a convenience store where she possibly had a beer, according to her mother, before deciding to blunder home through the storm. She phoned home to share her intentions, saying, "My moped has two rubber wheels, Mom, I'll be fine."

North Carolina does not require a license to own a moped. Ms. Tippett had acquired hers two years previously after a DUI conviction.

The Highway Patrol had blocked off several roads that were inundated with water, including Ms. Tippett's path home. But Ms. Tippett rode right past the officer and the barriers, lost control of her vehicle, and fell into the swollen creek below. The officer retrieved rope from his vehicle and proceeded to haul her from the water.

He then interviewed Ms. Tippett, probably inquiring about her motivation for speeding through a roadblock during a flash flood. The officer began to suspect that she had been drinking. When he briefly returned to his patrol car, Ms. Tippett
took the opportunity to confirm his suspicions. She escaped--by jumping back into the creek!

The Highway Patrol officer attempted to rescue her again, but alas, it was too late. The victim's mother speculated that her daughter's motivation for jumping into a flooded creek was to rescue her drowning moped. "She loved that thing.

October 2009, Florida | The Slush Pile mods say age fifteen is too young to win, but this case might be an exception. A Palm Bay couple and their 15-year-old son were putting up a ham radio antenna one evening. Bafflingly, not one of them thought to
survey their surroundings. Unaware of the presence of an unseen menace overhead, the trio raised the aerial pole in the dark, struck a power line, and Zap! Three Darwin Award winners.

"It is an unfortunate set of circumstances that led to the most tragic result," said the Palm Bay Fire Marshal. "It happened in an instant." However, it can hardly be called an accident. All three were voluntary particpants and old enough to know better.

Readers beware, power lines lurk overhead waiting for the unwary. Our thanks to 55-year-old Melville, 49-year-old Anna and 15-year-old Anthony for reminding us not to stick a pole in the power grid. Just say no to premature cremation.
at 5:42 am No comments:

As we get older we sometimes begin to doubt our ability to "make a difference" in the world. It is at these times that our hopes are boosted by the remarkable achievements of other "seniors" who have found the courage to take on challenges that would make many of us wither. Harold Sclumberg is such a person. 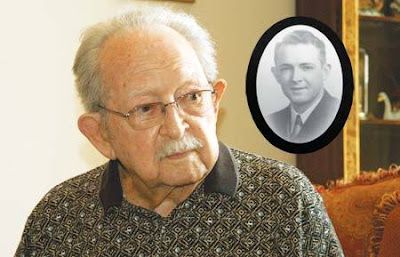 I've often been asked, 'What do you old folks do now that you're retired?"

Well..I'm fortunate to have a chemical engineering background, and one of the things I enjoy most is turning beer, wine, Scotch, and margaritas into urine.

Email ThisBlogThis!Share to TwitterShare to FacebookShare to Pinterest
Labels: Aging

A man is walking home alone late one foggy Halloween night, when behind him he hears:

Walking faster, he looks back and through the fog he makes out the image of an upright casket banging its way down the middle of the street toward him.

Terrified, the man begins to run toward his home, the casket bouncing quickly behind him.

He runs up to his door, fumbles with his keys, opens the door, rushes in, slams and locks the door behind him. However, the casket crashes through his door, with the lid of the casket clapping.

on his heels, as the terrified man runs.

Rushing upstairs to the bathroom, he locks himself in. His heart is pounding; his head is reeling; his breath is coming in sobbing gasps.

With a loud CRASH the casket breaks down the door.

Bumping and clapping toward him.

The man screams and reaches for something, anything, but all he can find is a bottle of cough syrup! Desperate, he throws the cough syrup at the casket...

Email ThisBlogThis!Share to TwitterShare to FacebookShare to Pinterest
Labels: Holiday

10. Does this come in children's sizes?

8. I'll be in the dressing room going blind.

4. Will you model this for me?

3. Miracle what? This is better than world peace!

1. And the thing a man should never, ever under any circumstances say out loud in Victoria's Secret: Oh, honey, you'll never get your fat ass into that!
at 6:47 am No comments: